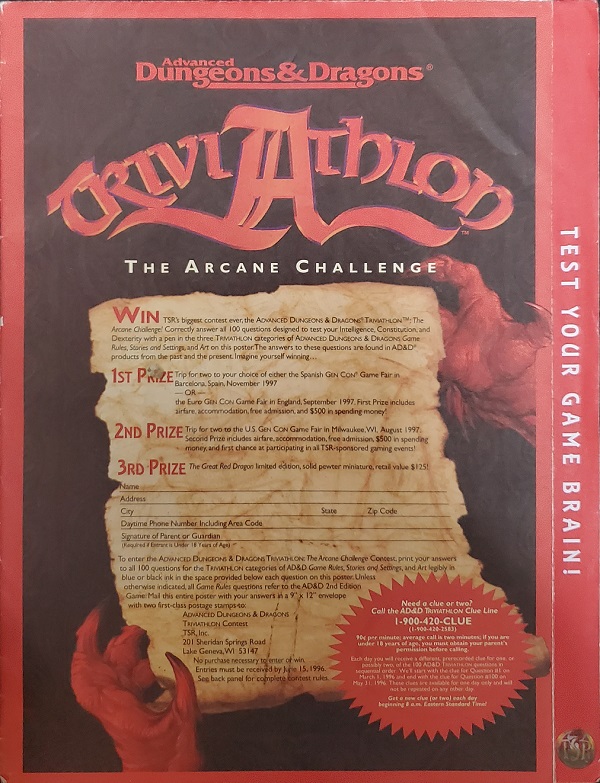 Back in 1996, I made my way to the mall, stopped in Waldenbooks, and picked up the latest issue of Dragon Magazine. This one, came with a large fold out poster featuring 100 questions about AD&D. Answering these questions correctly would put you into the running for one of three amazing prizes:

While the trips to GenCon would have been awesome, I have to admit that the ’96 me had a spot already picked out on the shelf for that dragon.

I still have that poster, however, the answers were what I needed. I found them once, but that was several years, and many hard drives ago. The subject of trivia contests came up the other day, so down into the basement I went to try and remember where I stuffed the poster, and once found, it was back to the internet to find the answers again.

I tried messaging the official Dungeons and Dragons Facebook page, but unfortunately, they were no help. This was printed 24 years ago by TSR, before they sold to Wizards, who was later bought by Hasbro, so I wasn’t really expecting much.

Turning to google, I saw page after page featuring posters for sale, a few pages with information about the contest, but no answers. Until finally, clicked on a link to Grubb Street. Much like me, Jeff Grubb was trying to find the answers to this decades old trivia contest, but unlike me, he found them! So, the first thing I did, was copy the answers and save them in the cloud so I can’t lose them again.

The second thing I did, was make two copies, one with just the questions, and an answer sheet. So, if you want to play along at home, now you can!

And for now, the poster goes back into it’s folder, which in turn, is placed back on the shelf next to the AD&D Trivia Game.